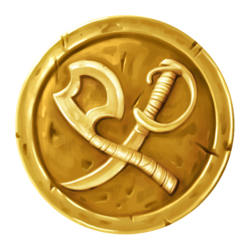 Recruit your crew, form your fleet, then harvest resources or test your skills fighting against other pirates to earn.

The first mode of the game to be launched is the Quests. Quests function as staking NFTs to earn rewards, only with a theme. Players choose a Quest, deploy a ship, assign a crew, and claim the rewards after some time. You need at least 1 Ship, 1 Captain, and 2 Crewmates to initiate the quest.

Players will be able to set sail to a dangerous ocean full of enemies. Players can battle their fellow pirates (PVP). Or they can fight enemy monsters hiding in various locations of the map (PVE) for rewards.

Starting from Phase 1, NFT owners can rent out their NFT as a set of Ship+Captain+2 Crewmates. The owner can set up the percentage on how to split the reward. After the scholar picks and plays with the set they choose, the Reward will automatically be divided between the owner and the scholar.